By Nicola Beckford BBC Radio 4, The World at One

Thefts of catalytic converters from motor vehicles have more than doubled over the past three years, a BBC investigation has found.

Almost 25,000 thefts were reported to police forces across the UK between 2010 and the first half of this year.

Thieves are ripping out the devices because they contain precious metals such as platinum and palladium.

Motorists can be left with repair bills of thousands of pounds.

Information obtained from 40 UK police forces revealed thefts UK had more than doubled between 2010 and 2012.

Some parts of the country saw a significant rise – in Bedfordshire and South Yorkshire thefts increased more than tenfold.

They more than tripled across Cheshire, Greater Manchester and Leicestershire during the same period.

James Goodson, a senior analyst with British Transport Police, says rises in the global price of platinum have fuelled the illegal trade.

He said: “We’ve seen that in the past metals such as platinum and palladium are affected by the changes in the market. That would be reflected at scrap metal dealer level by the dealer offering a better price for that material.

How Can You Prevent Theft?

“We’ve identified that when there are increases in the price of these metals and materials then we often see an increase in levels of theft reported to us.”

Police say vans and 4×4 vehicles, which are easy to crawl underneath, are particularly at risk.

Det Supt Alison Evans, national co-ordinator for the National Metal Theft Task Force, said: “We have people involved in organised crime [here], because we have had depots and fleets being hit, and that suggests a level of pre-planning that isn’t involved in your spontaneous type of offending.

“We know from our intelligence from the arrests we’ve made that most of the people we have arrested are UK residents. There is an element of Eastern European involvement but a lot of these people are people who trawl around the country in order to attack particular locations that have been identified as vulnerable.”

Det Supt Evans went on: “Catalytic converters can be processed through some scrap metal dealers, but they need to have a particular piece of equipment to be able to do that.

“But one of the emerging problems that we have identified is the direct export – them being exported in containers to emerging economies where they are either reused or then they can be broken down there.”

Legislation that came into force on 1 October banned cash payments for scrap metal with the aim of making it easier to trace people selling stolen metal. 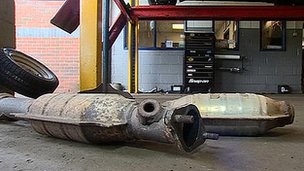 Jonathan Elvidge’s fleet of delivery vans was targeted by thieves just before Christmas 2011.

Fifteen vehicles were stripped of their catalytic converters when his depot was raided one night.

He said the thief managed to saw through and remove all 15 catalytic converters within 45 minutes.

Mr Elvidge said: “The cost to the business was significant. I mean keeping the vehicles on hire and bringing in new vehicles would have cost us £15,000 to £20,000.

“But the real cost is the lost revenue in the stores, which we estimate will be in excess of £100,000. So the real risk to the business, was going out of business.

“We employ 600 people at that time of the year and all those jobs could have been at risk because we couldn’t get the stock out to the stores.”

They contain a ceramic honeycombed core coated with metals such as platinum, palladium and rhodium.

The metals act as catalysts and convert the harmful gases into water vapour and less harmful emissions.

Want to join the discussion?
Feel free to contribute!

How to find us